Have you ever tried lighting a lamp in the wee hours of twilight? As soon as you light it, a layer of light pervades around and darkness is instantly dispelled. However, did you observe that a lamp, while has the ability to light up the room, is unable to reach beneath itself and hence unable to shed light on the dirt accumulating? The lamp brightens all around, but not underneath it.

The same principle applies to humans too.

We have within us to spread the cheer, share the love, brighten the spirits of many of those around us. Yet there are times, when we, in our quest of keeping up with our family name, our reputation or social standing, coupled with our immense blinded love for our loved ones end up doing a lot of injustice to them. Invariably, our own children. We are unable to see the weaknesses or faults of the people closest to us, hence are unable to correct their behaviour in the right perspective. And eventually leading them to the path of wrongdoing. .

A recent Tamil movie, Ponmagal Vandhal, starring Jyotika in the lead role, beautifully illustrates this point. Ponmagal Vandhal loosely translated means the Arrival of the Golden Girl.  In this child abuse and mass murder mystery, the protagonist is a lawyer who fights for the rights of the accused woman killed during a police encounter.

The story very well highlights how an individual’s ego and his quest for fame can destroy the entire family legacy, how the right upbringing of a child is extremely important, and how standing up against wrong doing and condemning wrong practices is important at every step. 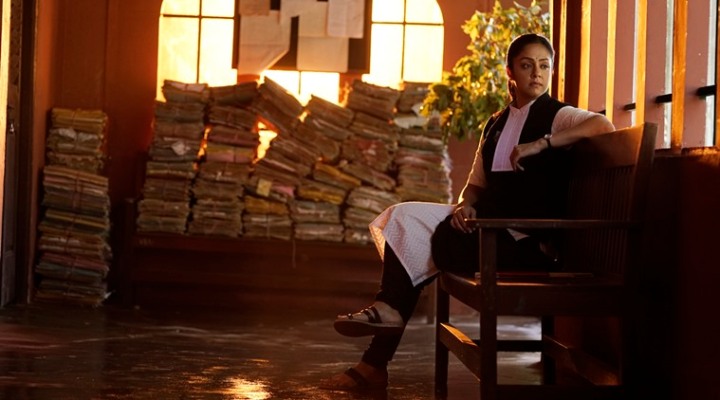 Experience teaches you many things but one has to take it in the right spirit. Especially,  the bad ones in order to deal with them appropriately. If we do not accept our bad experiences, it becomes very easy to go into deep depression leading to a much larger problem, sometimes driving people to suicide. Highlighting the positive side of this, the movie showed how the protagonist’s determination and attitude after being exploited, helped her in getting justice delivered.

The story also showcases the vast dichotomy prevalent in our society – a rich brat, Rohit the ‘victim’, raised in a privileged society with all the ego and status his father could muster and a widow, Jothi the ‘accused’, with a small child struggling to make ends meet. Over here, the important role of upbringing has been highlighted well.

The story begins with kidnapping and murder of some girl children. As per the police investigation, the widow did this and was caught red-handed by the camera and was eventually shot in an encounter.

Twenty years later, Venba, fresh out of law school (played by Jyotika), gets this case re-opened. While according to the police, it was always an open and shut case where Jothi, the accused, had not only murdered children, but also killed two young boys (Rohit and Diwakar) who tried to save the kids, Venba thinks otherwise.

As soon as the case reopens, the ground shakes. Truth, after all, is always feared.

While on one hand, Venba faces a lot of flak from the victimized children’s family and general public, for trying to fight for a woman who not only killed young kids but also killed the son (Rohit) of one of the most respectable men in their city – Vardarajan. Vardarajan is a god-fearing man who does a lot of social work with his earnings. He has opened a few orphanages in his dead son’s name and does a lot of charity especially  in the area of children’s education. A man well respected in the town.

On the other end, there is a sudden and unplanned replacement of the government appointed lawyer of the case right in the beginning of the trial, with a very renowned criminal lawyer. An attempt to crush the novice lawyer by a seasoned stalwart.

Yet Venba persists, in her firm belief that a wrong was done and justice was due.

The accused, Jothi, is shown in flashback to love children. After her husband’s death, she struggles to provide for her daughter, yet raises her fearlessly – telling her that she should not fear anything or anybody. Her world is around her daughter and her love for her is immense.

The trial starts with some very interesting arguments in court. Definitely a must watch for those partial towards courtroom drama. A brand new lawyer taking on the seasoned players with such smoothness and finesse is why every lawyer becomes a lawyer in the first place.

There are a lot of mysteries in the movie:
1. Why was there an encounter?
2. Why did Venba get the case re-opened?
3. Why there was a change of lawyer in the heat of the trial?

During the course of the proceedings, the lawyers and the police on the other side present tough arguments and make Venba look as inexperienced as she actually is. But it is, though unrealistic, admirable on Venba’s part to keep going and use her strategies at the right time to turn the table.

The movie makes an important statement on child sexual abuse. It highlights how many innocent children are sexually abused, but are forced to keep their mouth shut fearing ridicule and ostracism from the society.

Venba shows us that you should speak up where necessary.

The movie nudges parents to listen – whatever your child says, do listen to them carefully. Children may exaggerate or talk seeming nonsense, but sometimes they try to communicate very important things in this manner to avoid being scolded. Kids are often abused by their own family members, but the child doesn’t say anything out of fear. They feel they will be ignored or their words will not be given importance at all. They may even feel ashamed of being touched or maybe scared of their parents (especially the ones who scold or beat). They might carry this scar forever and unknowingly start hating their parents for this act. We should help them by encouraging them to speak and making them feel confident.

It also raises another pertinent question – does doing good wash away the bad? What is the right form of parenting? Vardarajan tries to show to the world that he is an amazing father. After he lost his son, he does good for the society in his son’s name to ensure that people remember him as a good soul.

For me, Varadarajan is that lamp, spreading education and livelihood for all those around. Yet, failing to see right underneath his own self. Did he raise his son with the right values of love, respect and being a good human being? For any child, the first role model is their parents. They adapt whatever the parents do and try to emulate them in their own way. By not reprimanding Rohit, Varadarajan gave a message to him that it is okay to commit crimes as long as you do some social work to compensate.

The movie progresses, and the turn of events at the end, is a very important testimony, rather a life-lesson, to the fact that truth shall always win if you persist enough. With some further twists that makes one look at Jothi with some deep reverence, this movie should not be missed.

A finance professional, Venky identifies himself as a humanitarian and works towards changing the mindset of people to bring more equality and eradicate discrimination. Follow him on Facebook @EmpowerMindset.