During the lockdown, we all have taken respite in Netflix and other VoD (video on demand) channels to pass the time which we have on our hands that was usually spent either on commute to and back from work or other not-so-productive work. It was during one of these sessions, when my eight year old son and I were searching what to watch (we need to be careful in terms of our choices, as most movies are for adults), we came across the movie called ‘Gone Kesh’. It was one of those small budget films with not so known actors and made on a subject which was not very typical of popular movies.

Before I delve more into what the movie was all about, I would take a short detour and mention a few things about my son. As already said, he is an eight year old kid, interested in soccer and skating. And like most kids his age, he has a fascination for superheroes. Unlike many kids his age, he has this newfound penchant for cooking. In my understanding, this comes from his immense love for food. This is evident from the fact that the moment he smells something from the kitchen, he can correctly guess what is being made. His favourite food ranges from Chhole Bhature to pizza, which is a result of his varied tongue palette. 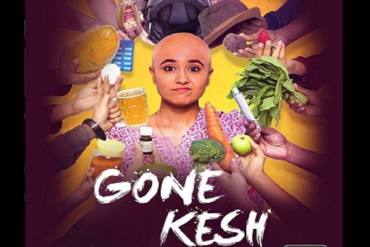 Coming back to the movie in question, it is based on a middle-class girl in her mid-twenties, who is a graduate and is working in a mall. During her school years, she started losing her hair to alopecia, leaving her distraught. Due to which she loses her self confidence and tries all ways to cure this disease. There was momentary victory for her, where she got her hair back but was left with hormonal imbalance. This led her to discontinue the hormone-based medicines and was again left with no hair. However, she then took on to wearing false hair or wig. Since her school days, there is this batch-mate of hers who is smitten by her but never has the courage to tell her this. He is also unaware of this problem that she is facing. One day he pays her a surprise visit at her home, where she is relaxing and does not have her wig on. She in unaware of the wig not being there, when he walks in on her. She only realises this when her mother points it out to her. Both have a long chat post this and, the lack of her hair does not matter to the boy.

Why I am writing this piece is because of this – while we were watching the movie, my son suddenly blurts out, “What is the problem if she does not have hair? Why is she being so sad about it? She can go to school and outside just like she is.” And further tops it with, “I do not understand the problem. What was the need to make a movie on this topic?“

When I heard him say this, I sat back, smiled and basked in my proud mommy moment. We might be doing something right somewhere as parents. He did not attach any value to physical appearances and had no judgment about them. I do not remember having any such conversation with him earlier on this topic or having to tell him to be more sensitive. It could also be that because this conversation never happened, he never gave any importance to such things. Seeing my son being non-judgmental and seeing no big deal whatsoever in physical appearances and taking people as they are, made me a proud parent.

This incident might be small, but it forms a big part of not just my son’s upbringing but also mine. I might still be judgmental of many things of a lot of people, but the very fact that I acknowledge myself being judgmental and catch it right there so that it may be nipped in the bud, is a big victory for me.

I was born and brought up in a south Delhi Punjabi family, where everyone was very particular about fair complexion. Being of a dusky complexion, even as a child I was made to realise that I have something major lacking in me as a person. Though relatives were not as direct, but they said things in an indirect way which pretty much meant the same. However, I never let it affect me in any way. I do not know what to attribute this indifference to? I do not really remember either of my parents, specially my mother, defending me in this. I always remember being there in an awkward silence, listening to the comments and then people laughing it off, pretending they never said it or never meant it. However, we all know what was said and what was meant.

As I grew up, this never affected me, but it sure did dent my confidence at some level, which made me avoid participating in extra curricular activities. The same was carried into college, the only difference being, I made it a point to delve deep into books, and let my marks and degrees do the talking. This might have made me have a chip over my shoulder, but I did sense a little bit of judgment in the people I met along the way. It was so deep in my psyche that I even brought this up with the then boyfriend (now husband!) of how he chose to be with me. He was shocked that I asked him that and how it was not even a parameter in his checklist.

The bias based on skin colour is so deep, that we often do not even realise that we have a bias. It has been ingrained in our minds that good is white and bad is black. Like me, many other brown girls suffer judgments and discrimination in all areas of their lives.

It was may be because of this that I made doubly sure that my son would not judge people on physical attributes. The incident quoted above, makes me proud and makes me think that I might be doing something right!

But we still a long way to go, though it is for sure the right track!

Reema has been a part of the legal academia for almost one and a half decades now. She has taught in various law schools and management schools in the NCR area. Her other interests include her own entrepreneurial  venture called ‘BaliKa’. She runs this small business with a few craftsmen working with her. She retails from a hard store on Hauz Khas and also online through her website (www.bali-ka.com) and Instagram (handle ‘bali-ka’). She stays in Noida with her family (married to Akshat – her law school batchmate) and has an eight year old son named Shiv. She loves to read in her free time and currently misses going out to various exhibitions and traveling for her business.