Picture yourself in 1960’s, and visualise a barsati (one room balcony tenement) in Delhi wherein lives a young girl all by herself. No, it is not by circumstances that she is there. It is by choice. And with approval from her forward looking parents who saw no qualms in their young 22 year old daughter living it out alone, instead of their palatial home in the echelons of Delhi society.

Let us talk about her mother first. Surayya Tyabji was a progressive woman (as were the women before her in her family) and was known to be a multi faceted woman who, holding up to the role of being a diplomat’s wife, was equally at ease with biking, hiking, finances and generally holding her ground. 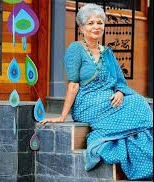 Mothers always inspire and empower us to redefine things in our lives. And thus the progressive outlook and the need to redefine things pushed this mother to allow her young daughter – Laila Tyabji – to step out and live her life on her terms.

Move from the 60’s to today – Laila Tyabji runs Dastkar which is a Delhi-based NGO working towards revival of our traditional art forms. She co-founded Dastkar as an initiative for rural women who excelled in art forms to become self-reliant and economically independent.

India has abundant art forms hidden in the deep rural sectors of the country. Laila saw that there is a clear divide as on one hand, there are these artisans who had no clue of the potential marketplace and on the other hand, there was a market which had no insight into the rich Indian artistry that never gets to the mainstream stores.

And thus Dastkar ended up becoming the bridge between these two sections.

What started as a small group in 1981, today is a mini conglomerate of 300+ crafts group across India. And the mission only continues to grow.

Our rich heritage in art forms, whether it is lambani embroidery, or the rabbi needle work, gond and madhubani paintings, or the chikan and banjara needle work, Dastkar encourages them all. While re-establishing these art forms in the wider world, they are also involved in various social initiatives like setting up avenues for women affected by terrorism in Kashmir, or families displaced in Ranthambore.

Laila is an active worker who is working hard to revive our crafts heritage while innovating in the space of design and art. She was awarded the Padma Shri by the Government of India.

Most recently, she is known for her stunning month-long campaign to revive handloom sarees on Facebook with the #iwearhandloom which caught the attention of the entire country. And led to massive revolution in the Indian handloom saree space.

A enthusiastic crusader with an undaunted personality, Laila Tyabji is a name to reckon with when it comes to redefining the various art forms of our country.