sang a young woman passionately in love, yet strong in her head, and shook an entire sultanate with her courage, conviction and, of course, sheer love for her beloved.

Loosely translated, the verse means when there is no veil with the Supreme Lord, where does the need arise to veil up myself (my thoughts/feelings) in front of humans.

The classic love story of the beautiful courtesan Anarkali and Prince Salim, Emperor Akbar’s son, made inroads back into our lives a few years back, in the form of a musical! A theatre production brought to life by Feroze Abbas Khan, a well-known theatre director, this musical is a live rendition of one of the iconic Hindi movies of Indian Cinema – Mughal-E-Azam. 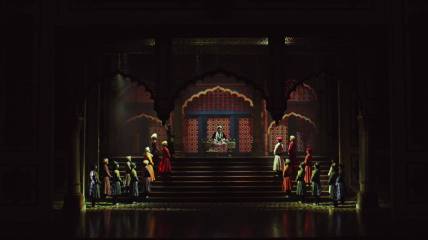 Art and culture form the core root of our society. And any, and all, attempts to strengthen it, nurture it, and, in today’s times, reinforce it, is welcome and needs an applause.

Let me pause here and take readers back into history. Mughal-E-Azam was an all-time hit movie that was known for its magnificent sets, extravagant decor, beautiful costumes, melodious music, outstanding star cast, and memorable dialogues. It was also a writing masterpiece, with seamless dialogues and classic conversations depicting the social fabric of the times as well as giving a mesmerizing insight into the passionate love, prevalent social dogmas, unyielding elders, staunch lovers, and positions of power. Though a black and white movie, the costume, cinematography, characters, scenes, and many such aspects were thought through with great attention while making this film. The film took close to a decade to complete and cost the filmmaker an unimaginable sum of money, and resulted in a spectacular classic.

And now this iconic film is running full houses as a musical show in live theatre to great applause and appreciation!

It is highly gratifying to see that this form of theatre is coming to life at a time when technology is sweeping across our lives and alienating us from our core roots. Ask any 20-year-old today about 3D, VR (Virtual Reality) or AI (Artificial Intelligence),  you may very well receive an instant answer from them. But prod them on Kudiyattam, Bhavai or Jatraforms of theatre, you are going to see them staring back at you.

Street plays, stage performance, puppet shows, folk plays, short skits etc. are turning alien to too many millennials. While they were once, to use a contemporary term, ‘talent base’ of actors for the Indian Cinema, today you see them moving into oblivion. Great actors like Shabana Azmi, Naseeruddin Shah, Farooq Sheikh have their roots in theatre from where they went on to become successful actors. Down south, actors like Rajkumar or NTR started their careers in street theatre and went on to become successful actors. They not only acted, but also directed and sang their own musical plays.

Coming back to Mughal-E-Azam, why a musical?

In 2004, a colored version of Mughal-E-Azam was released. And somewhere at that time the roots of watching a musical were sown in his mind, says the director. All for love, he adds. To quote his words, ‘Love stories are bigger when sacrifices are big. Anarkali knew the consequences of loving Salim. She was ready to die for love.’

Driven by the firm belief that a theatre is more befitting for this classic, the makers have used a cast of over 350 people and created a play that runs for about 2 hours and 15 minutes and holds a strong contemporary sensibility. The grand set, the costumes, trained dancers and more importantly the live singing on stage brings to life the immortal movie for us, and makes us relive the historical fiction. The play has already run 50+ shows in Mumbai and New Delhi and intends to go global next year. So, all you lovers of this form of art, do take your families, especially the younger ones, and see this musical when it comes to your city.

I hope this endeavour of Feroze Abbas Khan, which has already won a few acclaimed laurels and has a documentary in Amazon Prime (Mughal-e-Azam – The Full Circle), ignites other creative minds, sets the tune for more such plays, nurtures our core art forms, revives them to their full glory and enables younger generations to connect back to our roots. Not only will it enable them to get a hold on our rich culture and heritage but also empower them to connect with their own selves, and the people around through a theatrical depiction of various emotions of life like trust, love, betrayal, anger, friendship, remorse, forgiveness etc.

After all, certain things like love and happy relationships cannot be downloaded using an App on a mobile phone!

(This piece was first published in Nov 2017 in the online magazine Jaggery, titled as Nurturing our Roots)