from her marrow, and dying

in her body’s threads winding tight, round and round,

I burn, desiring what the heart desires.

go the famous lines of Akka Mahadevi – a 12th century poet from Karnataka.

Our history is replete with women mystic, poets, courtesans, devdasis who wielded their pens passionately and wrote unabashedly about their thoughts, opinions and feelings. In addition to Muddupalani about whom I wrote in my last column, we also have Mirabai, Andal, Sule Sankavva, Nagarathnamma, Lal Ded, Sant Soyrabai etc. Each of them had a strong voice and ensured their voice reach the masses through the medium of vachanas, shlokas, vakhs, poems, sonnets etc.

However only a few of their writings have found the way into mainstream in a structured format like a Meera Bhajan, Andal’s Tiruppavai, or Soyrabai’s Abhangs etc.

There is so much more that is written and available but needs to be brought out to the world. An arduous task that needs dedication, commitment and passion.

Balakrishnan Raghavan (Bala) is doing his bit in making that happen. A passionate classical musician formally trained in Carnatic music, but highly proficient in other forms too, is taking some steps in ensuring the voice of these amazing and daring women poets of our history does not fade off into oblivion.

A musician of the Indian classical and folk styles of music for over 15 years, he dabbles with music, dance, theatre, poetry etc. and is highly inspired by Kabir, Tyagaraja, Vedavalli, K V Narayanaswamy, Allauddin Khan, Bhimsen Joshi, Prahlad Tipanaya to name a few. An active membership of the SPIC Macay group during his college days and his deep rooted focus towards learning music has enabled his evolution as a very intense and passionate musician.

His focused journey in music led him to diversify into other forms and formats.

He collaborates with dancers in the art form of Bharatanatyam to bring out visual imagery of these poems. He is part of the initiative called as ‘Abhinaya through Ages’ where he works with dancer Chamu Kuppuswamy and brings out novel and beautiful works in a dance form. He has composed and sang a piece that was presented at the House of Commons, British Parliament to celebrate the 750th birth anniversary of Sri Vedanta Desika recently. The piece Gopala Vimshati was written by the Desika 700 years ago, and Bala and Chamu brought it to life last week in London!

In addition, he is a part of the community of Sant Kabir that works towards ensuring satsangs, bhajans and dohes are brought to the contemporary audience in a more palatable and ‘cool’ form.

While his repertoire has been deep yet diverse, he is also a musician with a strong urge to take the path less travelled. I asked Bala on what made him take to this niche path of delving into an alternate form of music in spite of his deep rootedness in the carnatic form, and why compose music to the words of erstwhile women poets like Muddupalani or Nagarathnamma? 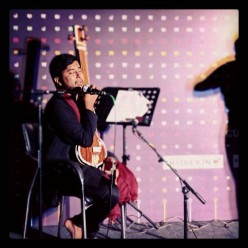 While for the former he asserts that music has no barriers and never restricts the learner, for the latter he says that the bold, liberal and sheer poetic brilliance of these words propelled him to ensure these verses are strung together through the thread of padams and javlis to form a nice musical garland. He further questions, if women as early as 500 BC could pen their voice, views and thoughts with such an ease, when did we change so much that women have to fight for even some basic rights today?

Have we regressed as a society?

An extremely pertinent question. Heartwarming to see that this question has been raised by a man and not a woman.

While we all ponder and seek an answer to his question, Bala is on his own journey to learn more music and bring to fore more such powerful verses and words.

A passionate musician at heart, he is now heralding a new phase of his life and is headed to his days of uninterrupted learning filled with only music, in a Gurukulam form, with his Guru – Smt. Vedavalli Amma, at Chennai.

Here’s wishing him the best and looking forward to his endeavor of using the powerful art form of music to bring out the voices of some daring, liberal and strong women of our history.