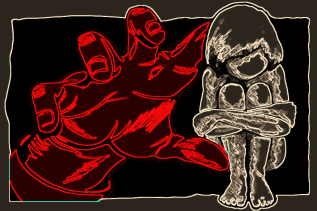 The recent headline-making rape cases prove again and again that something drastic needs to be done to stop this ‘rape culture’. My fight as a woman, as a lawyer, as an activist and as a writer has been to encourage women to find their voice, even at the cost of defying their so-called ‘boundaries’. But this fight is incomplete unless people understand two very fundamental things:

I am shocked beyond words by these everyday occurrences. Yes, when I write about women rights, I get called all sorts of names, the most interesting advice till date being ‘go back to the kitchen‘. I am not Simon for god’s sake (sorry for the bad humour)!!

But none of that prepares me to understand the ordeal our young innocent babies are going through. I feel tremendous pain if I get pricked by a needle or cut myself somewhere. How can I even imagine the torture these kids had gone through when some deranged perverts cut their private parts, inserted rods in them and generally had a gala time deliberately hurting them?

What kind of a society do we live in? Worse yet, such brutal crimes happening in the name of religion and politics. Have we turned back time? Didn’t we cross the civilization mark to reach 2018? Even today, at my age, I do not fully understand the consequences of belonging to a particular religion or supporting a specific political party. Then how can we expect a small child to understand all that, and come to terms with the pain and suffering caused to her just because she belongs to a particular community? A rape is a rape. Period.

To top it all, we indulge in victim shaming. I ask you this. What did the innocent 8 year old child do to deserve this? Dress provocatively? What did the 8 month old child do? Show off its cleavage? Are we so shallow as to forget our humanity based on someone’s gestures or dresses? If so, then why are men called strong, I have never seen such weakness in my life!!!

We should all bring our rage out. Bring out the anger, unleash your wrath on these perpetrators of crime, on protectors of criminals, on parents and on the system. It is nice to see everyone enraged right now with such crimes and indulging in what I call ‘facebook activism’. But what are we really doing about it?

It is one thing to protest that offenders should be severely punished (which I wholeheartedly agree to, by the way) but the bigger need of the hour is to stop production of these monsters. Some people are calling them animals, but I think we do animals an injustice by saying so, since they NEVER kill or hurt for pleasure.

Having said that, it is funny how we lose our perspective while protesting for something. We ban pornography, yet as per research the Kathua rape case remains the most searched for porn video as on date. We ban sex scenes as inappropriate, yet some movies talk about balatkar (rapes) in a comic manner and we enjoy such jokes. We ban women from wearing short skirts or showing cleavage, yet we see men flashing themselves, peeing and bathing on the street. Have we really lost our minds? Why are we not able to see how our own behaviour is impacting and encouraging crimes?

I have a few pointers which I hope will help parents/guardians in preparing their children to face dangers:

Let us all come together in protest and make a positive change….

Let us make this a safer place for all of us and our babies, who deserve a safe and pain-free life!!!

Let us fight on till we achieve success….

In the end, while we are preparing our daughters to be good wives, mothers and daughters-in-law, let us not forget to teach our sons to be good husbands, fathers and sons-in-law.

All pieces of art need the creator to give themselves in completely - heart, soul and mind. It is this collective immersion that eventually sculpts out a piece of art that is outstanding and connects to the core of the audience.
Young Voices
Artist in You!
Beauty and Wellness
Nurturer in You!
Fighter in You
Achiever in You
Pre-British India had a very progressive conception of sexuality and gender identity... (Link in bio)