There is a fighter in every woman. Whether she fights for herself or not, she fights wholeheartedly for her turf, her kids, her family. But very few ones go out there and fight for others. 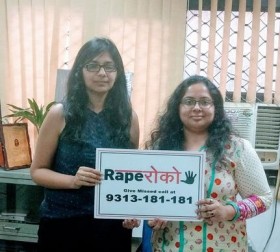 Meet Ms. Swati Maliwal, Chairperson of Delhi Commission for Women (DCW). She is a woman, who not only fights for herself and her family, but for other women and children in the society. She is an engineer and gave up her cushy job to fight for social causes. She has been in activism for 12 years now.

She has recently concluded a RapeRoko movement, a Satyagraha where she has put forth a few demands to the PMO such as hastening the verdict from the judiciary, speaking up on occurrence of crime etc. The trigger for her movement was the heart wrenching and appalling incident of the rape of an eight month old.

I caught up with her a few days before Women’s Day on 8th March.

Jyoti: Tell us a bit about your journey in activism so far.

Swati: I started working at the grassroots on issues like RTI, anti-corruption and women empowerment. These are issues that I have been passionate about. It has been more than 12 years in activism and here I am.

Jyoti: You have done so much to alleviate women and bring them justice. I am sure everyone asks you how you started your journey. But what I would also like to know is if there was any eye-opening moment, any particular incident that triggered your passion?

Swati: Immediately after my engineering, I was placed in HCL. There was a joining period of 3 months, and I had some leisure time. I was walking around one day and saw an old man teaching around twenty students from underprivileged background under the shade of a tree. While I was surprised and even inspired, by the man who spent his time with children, I felt extremely guilty. I felt miserable that till that point in life I have not done anything back for our society. So I joined along in teaching them. It was the first time that I was interacting with children and particularly from that background. And I think that really changed my life.

That entire experience made me introspect, and I started feeling that they were much more alive than I would ever be. And that is why I decided to leave my job and start teaching them full time. In a month or two, the size grew to eighty children, because I was putting in a lot of effort.

Then I started questioning myself again. How many children will I be able to teach like this? That started the journey from one NGO to another. And then I met Mr. Santosh Puri of Parivartan and also came in touch with Arvind Kejriwalji during his activism days. I worked with Parivartan for almost 10 years.

Initially, when I had left my job, I had decided to take a sabbatical of 1 year to teach the kids and then re-join the corporate world. I do not know how time flew by, that one year has become 12 years now!

Jyoti: That’s quite a story. Usually people get inspired to help others by negative incidents but this is positive inspiration to do good for people. It is really amazing. My next question relates to the concept of feminism. Feminism is defined differently by different people. What, according to you, does a truly empowered woman look like?

Swati: I think every woman is empowered. She just has to find the right key. Empowerment is really about being able to assert your rights. Everybody has rights. We are a free country and we have a lot of rights, but because of the kind of society we are brought up in, and the kind of pressures we are facing, whether it is fear at home or at workplace, somewhere we start feeling that we don’t have rights. It is very unfortunate. So the day we stand up for our rights, we will be truly empowered. And more importantly, we also need to stand up for rights of other people. So I see a truly empowered woman as someone who is not only fighting for her own rights, asserting her own rights, but also helping other people in asserting theirs.

Jyoti: Very true. Asserting rights is indeed the crux of feminism. Which brings us to the increasing crimes of violence against women. Can you please throw some light on DCW’s RapeRoko movement which is clearly seeing a lot of support from people? 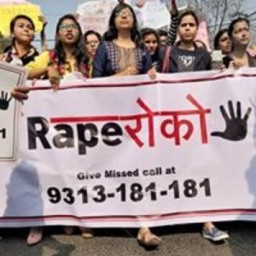 Swati: It has been two and a half years of my tenure in the DCW. I have been going and meeting all survivors of rape, usually as soon as they reach the hospital. And I have seen rape victims who are one year old, one and a half years old, two years old and the list is endless. And almost a month back, I saw a rape survivor who is just eight months old. And she was found in a pool of blood. She had to undergo a three hour operation! I cannot even express what I experienced when I went and visited her. I was totally shattered and devastated. I can still hear her cries in my mind and it is extremely painful. That just triggered me to think about what to do for justice.

As the DCW chief, I have tried everything in the past. I have gone to the court, I have met leaders, and I have given recommendations. In just my first year of functioning, we handled over 12000 cases, we attended 3.16 lakhs calls on the 181 helpline. We have assisted 5500 sexual assault victims in different court hearings, 1869 counselling sessions, 7500 grassroots visits and 55 recommendations. And we are the only commission that functions on Saturdays officially. Even otherwise, we work on Sundays and nights. We slog day and night.

And I felt so shattered that despite all of that, I had to witness the agony of that eight month old baby. And then I decided to do a Satyagraha. I haven’t gone back home for almost 30 days. And I am not planning to go back home till the 8th of March.

It is really unfortunate that in a free country like ours, the DCW which is a statutory body is not being heard. We are forced to do a Satyagraha to be heard. And that is when I realised that the powers that are, will not listen until they feel that you have a movement on the ground. That is why the RapeRoko movement was launched. And we are trying to get each and every person in Delhi and the country to join us. What we want is strong deterrence. We are demanding that, at least in the cases of child rapes, rapists should be punished within 6 months.

Jyoti: The expectation in relation to our legislation and enforcement is clear. Do you also want the society to learn something from this? And any expectations from women themselves in their individual capacity?

That said, of course the main target is systemic change. Until people are scared (especially in the capital) that if they do something, there will be strong action against them, these cases will not be deterred. That will change mindsets. At the same time, until then, we need to get people out, we need to break this culture of silence around rape and that is exactly why RapeRoko was started, because it is not just the silence of the system that is deafening. The silence of the people is much more deafening.

And it has been amazing to see the kind of support and the kind of response RapeRoko has been getting. It is just phenomenal. We have volunteers from all across joining us. They are coming here. They are going to different places. The Satyagraha has just become a movement. In the first week itself, we were able to collect one lakh signatures. One lakh letters, and not just signatures. People are writing proper letters, and wanting to send it to their Prime minister. I think the movement has created phenomenal unprecedented impact. I think each and every volunteer going and interacting with people, is what is going to create mindset changes. It is really important to break the culture of silence.

Jyoti: That is phenomenal. But it is not just about giving justice to victims but to avoid such crimes altogether. That is what we, at Eyra, actually believe in and we are trying to create a mindset where women are not just seen as objects of desire. When we talk about rape, what is your take on marital rape? We still do not have any law that makes it an offence. So people actually look at sex as their absolute right in a marriage.

Swati: I think any kind of violence, whether within or outside a marriage, is something that needs to be completely prohibited/disallowed. And I think we should definitely revisit our laws to see how proper systems can be designed so that girls who are facing that kind of violence within a marriage can be provided relief. The issue needs to be addressed.

The above interview was taken on 1 March 2018. Following this, the RapeRoko march was concluded successfully on International Women’s Day, 8 March 2018, when Swati managed to submit the collection of letters to the PMO office, braving resistance and sustaining injuries in the process!

And the fight continues. You can join/follow the movement on www.raperoko.org

Eyra salutes her courage and her drive to help women, at the cost of her own safety.